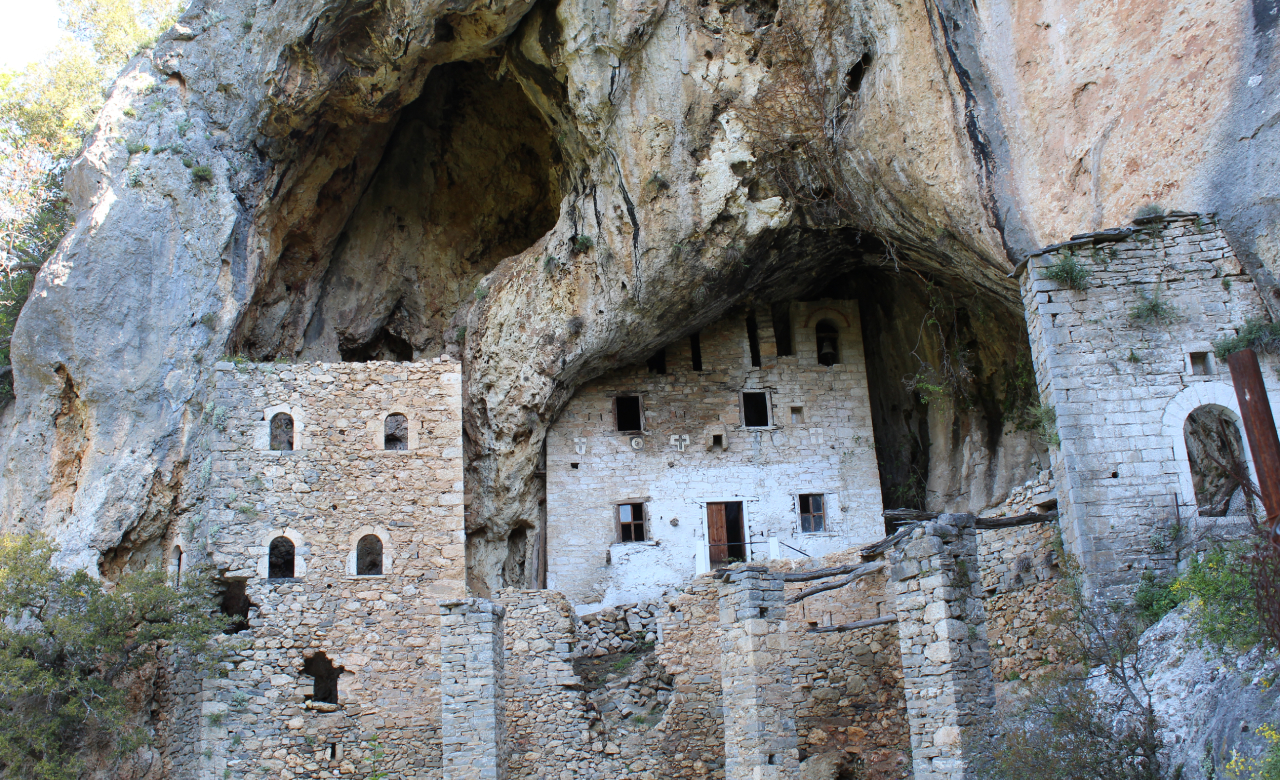 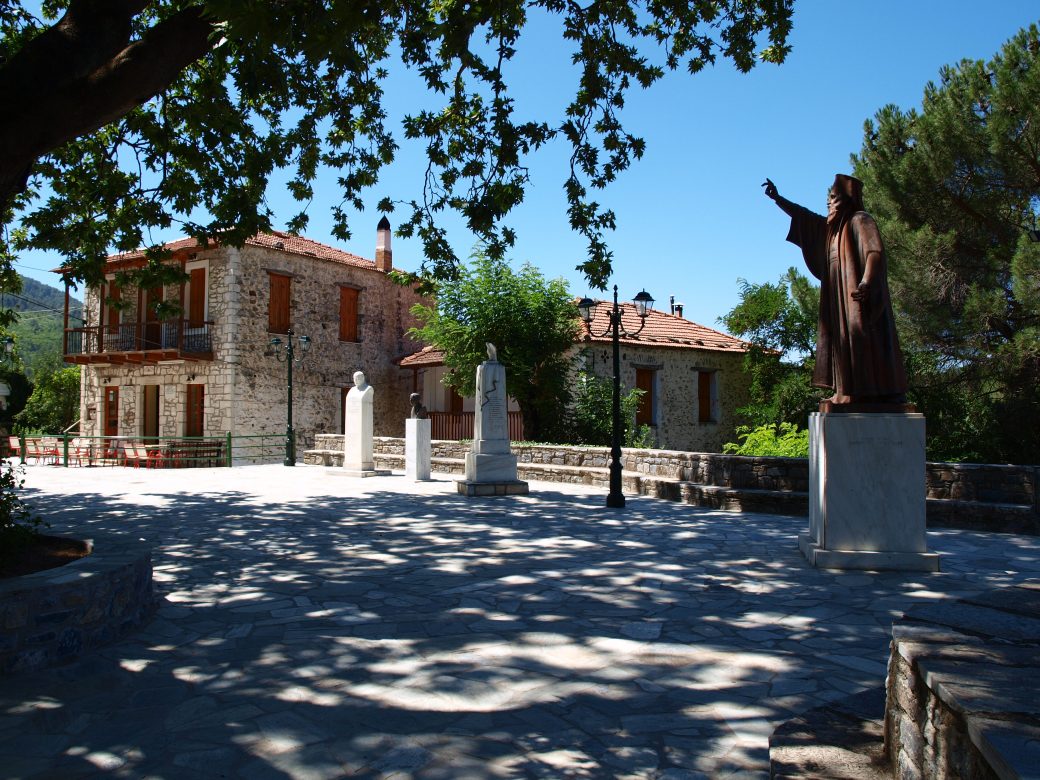 Vamvakou lies on the west side of the Parnonas mountain range, at an altitude of 2,963 feet above sea level; it belongs to the municipal sector of Oinountas of the municipality of Sparta. It was built in the 15th century. The name of the village – Vamvakou [Pampakon] – probably derives from the medieval Greek word for cotton [vamvax], as stated as well by the historian Sarandos Kargakos in his speech on August, 3 of 2013 in the village square.

In its heyday, Vamvakou numbered 200 families – in fact, the village was known for its large families. The inhabitants of Vamvakou [Vamvakites], based on data about their average life expectancy, were characterized by long life, with some of them living beyond 100 years old.

Regarding the village’s economic activity, historical data and traditions reveal that its people were mostly into farming – working with walnut trees, chestnut trees, potatoes, cherry trees, pear trees and vegetables – as well as into livestock breeding, with testimonials mentioning that there was a time when 30,000 sheep and goats were grazing around the village. And, of course, one thing that deserves special mention is the famous wine that was being produced there, named Oinountiadis Oinos. At the same time, Vamvakou evolved into a village of workshops bustling with activity, mainly in relation to cotton that came all the way from the East. Finally, some Vamvakites got to study and practice medicine and teaching with great success.

There are documents for the fights and sacrifices of the people of Vamvakou both before and after the Greek War of Independence. They played a major role in the Balkan Wars and the Greco-Turkish War. On the monument to the fallen heroes standing in the village square, there is a reference to 22 war casualties, while 2 more people lost their life during World War II. The death toll during the German Occupation and the Civil War was even higher.

Immigration is a chapter in history involving a lot of pain and sorrow for those who experienced it. The majority of the people emigrated at the end of the 19th century, mostly to the U.S., South Africa, Australia, Egypt and Russia (explaining the nickname “Russians” that was attributed to several Vamvakites). At the entrance of the village, there is a characteristic landmark dedicated to the uprooting of that period, called Stathmos Sygkiniseos [Emotion Station], which was the departure point for dozens of Vamvakites after having to say farewell to relatives and friends.

When the Peloponnese was conquered by the Turks, it was divided into 24 provinces, known as kazades. Vamvakou pertained to the province of Mystras – a fact that justifies the byzantine interconnection of the two area.

Worthy of mention is the burning of the temple of Assumption by Ibrahim Pasha on May, 12 of 1826. The church was torn down due to the instability of the ground; its reconstruction started in 1900 and was eventually completed in 1913.

From the beginning of 1800 until 1833, Vamvakou served as the seat of the Diocese of Vresthena. Having Vamvakou as his base, Bishop Theodoritos the Second took part – as head of the people of Vamvakou – in battles throughout the Struggle for Liberation, with the most outstanding being that of Tripolis.

A special chapter in the history of Vamvakou is the Union of Plenipotentiaries or else the Commonweal of Vamvakites. In essence, this was a social contract focusing on the implementation of projects for the welfare of the village. This 20-member committee started its operations in 1898 and was active for 16 years, guided by the motto “Strength through unity” – while the visual accompanying the statute was “a handshake of equals”. At the center of this endeavour was, of course, volunteerism as, at that time, the inhabitants would work 15 days per month as volunteers for the sake of the village’s development.

The following excerpt from the statute of the Union of Plenipotentiaries clearly expresses its scope: “We got used to expecting everything from the government. There is no excuse for us to be idle. It was this thought that urged us to find a way to prevent our village from going downhill. All that Greeks need is a boost to follow the right path.”

The administrative model of the Commonweal of Vavmakites served as an example for the introduction of the community system in local government administration. As stated by Eleftherios Venizelos upon his proposal of the Law on Municipalities and Communities in 1912: “Lacedaemon can boast of first inspiring the self-government of municipalities and villages by setting up the Municipal Community of Vamvakou, which was fervently received by the friends of Vamvakou all over the world, as it is realizing projects for the organization and progress of the beautiful mountain village”. Indeed, the Law on Municipalities and Communities that Eleftherios Venizelos introduced in Parliament in 1912 was modeled on the statute of the Union of Plenipotentiaries.

The goal of the Union of Plenipotentiaries of Vamvakou was to shape a demographically modern population. When it eventually completed its activity in 1914, it had achieved a great deal in education, organized livestock breeding, agriculture, arboriculture, moral improvement and electoral freedom.

Basically, this was the first organized and recognized community administration in the history of the Greek state, which started in Vamvakou and was then regarded as a good example to follow and a model for development. It should be pointed out that 600 villages and municipalities asked for the guidance of Vamvakou and created committees similar to the Union of Plenipotentiaries. Characteristic examples are those of Koropi, Vrahneika, Iraklio and others.

Agia Kyriaki was built on the south of fort Krivi; however, there is no confirmed data about the date of its construction. According to tradition, shepherds who were taking their animals out to graze in the area saw at nighttime a light shining near the monastery, which vanished in the morning. As this was repeated from time to time, one night, they rushed all the way there to solve the mystery; in a hole, they found the icon of Agia Kyriaki and thus built the monastery to honour her.

Testimonials reveal the existence of the monastery since 1800, while historical sources mention that a group of Vamvakites went to Istanbul to take permission to build the monastery of the Assumption; there, they came across a woman, who used to be a nun in Agia Kyriaki before being captured by the Turks and taken to Istanbul. It must be noted that this woman talked, among other things, about traces of a blacksmith’s forge and yarn at the position Doukas, as well as of water pipes n Paliochora (where Agia Triada stands today, near the Cemetery).These testimonials support the theory regarding the origin of the name of Vamvakou in relation to the cotton activity that flourished there.

Agia Kyriaki was at the center of important historical events:

– The Turks demolished the monastery with cannons they had placed at Vagenas.

– During the Ottoman Rule, the people of Vamvakou were hiding their valuables in the wild fig tree in the monastery, as well as in the holes in the rocks visible till today.

– Daniil Katsiris was an emblematic personality who built the famous cell on top and to the right of the cave monastery.

– The Germans and Security Battalions tried to blow up the cave monastery using landmines and machine guns as they believed that guerillas were hiding there.

– The monastery served as refuge for Christians under persecution.

After digging, monk Symeon Koutsoumbis traced bones scattered around, proving violent death. Other monks who lived and acted in Agia Kyriaki were Polykarpos Serbanos, Meletis Bakogiannis and Dionysis Vonitopoulos. The latter moved to Hydra, after being shot by thieves who broke into the monastery. Later on, he returned to Vresthena and then to Vamvakou to find himself again in Agia Kyriaki, where he got involved in poetry, medicine and the education of young people, who wanted to learn by his side.